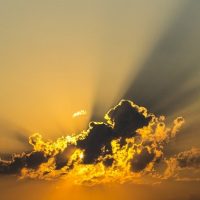 The idea came to see how many names or titles for the indescribable, ineffable Divine could be found.

Indeed, in this endeavour one is trying to do the impossible by trying to describe what cannot be put into words, but the effort still happens out of devotion to and love for God / Divine.

Sri Anandamayi Ma, an Indian Saint (1896 – 1992) and described as “the most perfect flower the Indian soil has produced”, said:

All names given to God have the same power.  You can reach your destination by taking any name you like.  (eg Brahman, Vishnu, Krishna, Rama, Shiva, Ganapatya, Hari.)  The more intense your sadhana, the quicker you reach Him.  Take it lightly, and you take more time. The fact that you are aware that of your incapacity to concentrate on God’s name is also His grace.  Even though not interested take the Name as a medicine.  This will also have a good result.  You will improve.  God’s names is not like worldly medicine that acts at times and at other times does not; God’s name invariably bears fruit.

Such amazing words.  Names for God can lead us to Him.  All names are sacred.  Such a wondrous, beautiful saint was Sri Anandamayi Ma.

As to the first name of God, Bhagvan Sri Ramana Maharshi said that ‘I’ is the original name of God:

The one, infinite, unbroken whole [plenum] became aware of itself as ”I”. This is its original name. All other names, for example Om, are later growths.’

The list is omni-denominational ie no religion is excluded – for God is not religious.  I think the list will end up a long one.  Of course this is mainly a list in English – were we to make it a list for all languages I think there would not be a longer list to describe anything else that could be conceived!  As a related thought just think how few are the words to describe the person/human/you/me/them.  Yet for God the names are really without end.

If you wish to join in a Kirtan (sacred mantra music) and recite God’s name ‘Bhagwan’ (the word for God in Sanskrit), here is the amazing music of Krishna Das.  Jaya or Jai means victory or victorious.

7 powerful ways to raise your vibrations