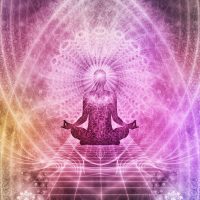 By new age and spiritual beliefs I mean the whole lot like ascension, ascended masters, ETs, disclosure, angels, elementals, fairies, psychedelic experiences, mediumship, clairvoyance, “The Secret” / law of attraction and so on.
I’m not saying paranormal and metaphysical things don’t happen in the relative realm, I’m saying the issue is what we then make of it after the event. We holy-fy such events and make them into a sort of religion. There is the event, then there is the strong belief that comes with it, cementing even more the identification of the ‘me.’ For example, those who have clairvoyance happen, will often refer to it as ‘my ability’ or some special ability that only they – or very few ‘gifted’ people – have. It becomes ‘my gift.’ It makes them special – in the story of me. People get identified with their ‘special abilities’ – they can heal, see auras, or ‘communicate with the dead.’ It becomes the badge of honour. The ‘me’ gets puffed up. There is pride. There is self-importance. There is self-satisfaction. In this sense, these sorts of spiritual beliefs are particularly insidious and hide a need for the individual to become something that is elevated above the rest. It is a further act of separation. Jiddu Krishnamurti would call it violence. Similarly, when people say ‘I’m a starseed’, ‘I’m a Pleaidian’, ‘I’m a…’ whatever, it’s the same thing going on – separation and thus elevation.
I’ll give you an example. Some months after the first falling away of the me-story and in the throes of emotional release, I really wanted to have a a paranormal experience. I used to wonder why others could see and sense all this non-physical stuff and not me. I remember reading a book by Shirley MacLean in which she described sitting in cold water and feeling herself burn up (spiritual stuff going on of course). I so wanted to have such things happen to me, to be able to say I was clairvoyant, or a healer or…and this is what I focussed on…I could see angels.
So, one day, I was waiting for communication from a friend by email and as I was brushing my teeth and glancing at a lavender oil bottle in the bathroom, I said that if angels exist then they would give me proof and the next email I got from this friend had to contain three separate things. One was a mention of the word ‘lavender’ (though lavender had never been a topic before), one was a specific way in which the email would be signed off, and there was another condition which I have now forgotten. Only a couple of hours later I got the email and it fulfilled all three conditions and I nearly fell off my chair lol. And from then on, it became ‘my angel experience’ and I assumed it to be evidence for angels.
Now, in reality it could have been an angel, or it may have been the power of thought / law of attraction, or it could have been just coincidence, just the play of happenings in life, who can really say. And frankly, what does it matter? The key point is that these things are all part of what is, of the Absolute, and as such none of them really matter per se.
Now, with further dropping away of the me-story, I see it as just what it was – I had a strong thought to see certain things in the email and it occurred just as had been thought. What that means – the why and the how come – doesn’t mean much to me anymore.
So what if ETs pop over to earth and help us out? So what if they don’t? So what if angels exist? So what if they don’t? So what if we’re going to ascend? (whatever that really means!!) So what if we don’t? What of it? Let’s just enjoy the ride, with all its ups and downs and conspiracy theories and supernatural goings-ons. Or let’s just ignore the whole story and go watch the grass grow! I think it’s a good policy to just follow your nose and see what life brings and see what you do and say, without laying too much claim to it 🙂
The self-importance that we give ourselves when we think we have some special ability, or that WE are the initiators, is truly that which blocks real freedom. If one has certain abilities then fine! No need to have an adrenalin rush about it LOL. Sure, go help anyone who you can with those abilities, but take note of this: There is one common factor I have noticed each time I have been touched directly by Grace and this is humility. There is no need to have attachment to specialness, for we are already that which is already special. Special is everywhere, not just in this body and this personality.
And what of the incredible things that can occur in the sense of the paranormal in the final analysis? Well to me they are simply just the incredible display of possibilities powered by Source (impersonally). The vast array of experiences that can occur can become heavy-duty beliefs, or just pointers to that Incredible Mystery which envelops the arrogant ‘me’ in a strong embrace (again, without favourites). The relative world can provide so much for so many, and it is all just the dance of separation within the Inclusivity of it All.
Thanks for reading.
Comments, as always, welcome.
Love,
Reena
[wp_ad_camp_4]

sup reena
i mos def agree with you with what you are saying…i myself for past few yrs have been having experiences out of the 5 senses and i tell other people that i feel that are OPENED to listening to me about my experience but I dont carry a badge…there are people out here that have PSI experiences that try to carry a BADGE OF HONOR but i feel that is unnecessary…..yea by performing this kind of action with an arrogance essence does point towards seperation….WE THE PEOPLE OF PLANET EARTH DO NOT NEED THIS KIND OF EGO AT THIS TIME….UNITING IS KEY….;)

dear, me not a regular meditator yet now a days when ever i sit closing all opening except lowest feel shivers & it increases to great extent. Me confused what to do. should i continue or stop here itself. if to proceed how.

Naresh, there is no secret to meditation. You just have to be with whatever arises. Confusion is fine too.

All we know in the 3d world is what is in front of our eyes and ears at this moment. Thats it. everything else is just in the head. we can only see a tiny bit of reality at a time.

We are here to live life…period.
Blessings

“And frankly, what does it matter?”
This is the real key. As you have so succinctly put it
“There is one common factor I have noticed each time I have been touched directly by Grace and this is humility. There is no need to have attachment to specialness”
One walks through life, enjoying it, but not grasping at it.
There is a humbleness inherent in just existing, watching and enjoying.
Does there need to be anything else.
Blessings

Dear Reena,
You are the bomb!???? You just blew the lid off the truth. Yeh!!!
Around 1988, I became familiar with a group of walk-in ETs who spoke of the idea that “the Universe re-arranges itself to accommodate your picture of reality”. They never answered questions, only discussed one’s “insights” and once they imparted their information, they left so as to not to “gather followers”.
I am greatful for this post. I have no idea what else you can say from this point forward LOL. Maybe more jokes are in the offering.
This is the first blog I ever followed because I loved your energy, and this post is the highlight ( high light) so far. Just being the observer of life is where true peace is found. The me does not have to be.
Blessings, Caroline

Dear Caroline, more and more recently I am getting shivers right up the body when I read some comments, and this was one of them! You are the bomb also!! Yes, as all that we believed in and needed falls away there is only just one thing left – Life just being Life! Love, Reena

“Dear Caroline, more and more recently I am getting shivers right up the body”
Really aware people can’t get caught by the consciousness dogs and their false replacement teachings. From time to time we meet on a random place like on your blog and enjoy that we are not alone in our understanding of life and its meaning.
Namaste, Chaukee