The Body-Mind Is Illusion 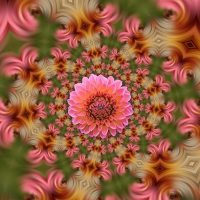 This morning I woke up very early, I don’t know if I had been dreaming the same point, but I was thinking about one point to do with the reality-dream / reality-event that occurred some years ago (spoken about before). Just to recap, in this event, I had pleaded before going to bed to be shown Truth in my dream, and was woken up in the darkness of the night with the dream I had been having of a vast alive spaciousness that continued in waking, with a rhythmical pulsating going on in my third eye area. The next morning I remembered it clearly and things were different, there was a different looking through my eyes, things looked fresher, and later I realized much emotional suffering had gone.
Anyway, so this morning, it was fresh in my thoughts. At the time of that dream I had described it thus: ‘There was a vast spaciousness, I was floating in space and an alive presence was actively showing me that nothing is never nothing, it is always something.’ However this morning something dawned – the part of ‘I was floating in space’ had actually not occurred. I (story) had added that. Because the me, as I now remembered, had actually not been there. There was no body or even mind floating in space. There was just this Presence. At the time, and all along since then, my mind had been unable to process the fact that in this dream-event there was an absence of me. Somewhere I had known that I had not been part of it but only now is that clear. The ‘mind’, being so habituated to always see itself and the body as the center of the universe actually added in an extra element to that dream-occurrence as at the time I could not even think about the fact that actually I had not been in that dream at all. I simply fantasized that I must have been there, for to think anything else was totally alien, yet I did not realize I was fantasizing, I simply added a ‘me’ into the whole scenario believing it without question.
It’s joyful to see this. The ‘me’ is such a close-fitting glove, like a very well camouflaged skin layer, that we think it’s us. The freedom from not having to be this or that – from not having to be floating in space in that dream – is so welcome. We see through the eyes of God, not the other way round.
The interesting thing about this dream-event was that there were no angels, no ETs and no ascended masters (LOL), no overt communication (just a kind of sublime or subtle communication, at least I wouldn’t say there was NO communication as such), nothing was happening, there was just vastness, just peace, intelligence and enormous energy and for want of a better word, great power (energetic).
But in spite of all these wonderful things, there still was no body-mind in that ‘scene.’ And it seems I had been looking for a more mystical experience that had happened to ME. I had plonked ‘myself’ right bang in the center of that ‘scene’ – interestingly, there was only me, noone else, LOL! I sought to take credit for that dream-event. This is also because we want to spice things up. In fact what actually occurred was – to the body-mind – pretty boring! Just a spaciousness? Err, nothing else? So the me gets added, to spice up reality. Reality is nothing special, and I think we human beings are too dependent on drama to see the simplicity of natural reality. Once such dependence (on thinking, on constantly chatting and talking, on goals, on doing, on getting to the next thing, on going here, there and everywhere – the ME) can be, for starters, sensed, then there is the possibility to also be graced with a sense of the Alive Spaciousness that allows all the dramas to be possible. And then, the dramas can be fully enjoyed, without self-criticism and put-downs, if one wishes!
So anyway, I wanted to share that with you, so that I could express it in words and express how the body-mind (the ‘me’) is an arrogant so-and-so who cannot stand to not be there, cannot stand to be dissolved back into its own illusion and will even make up things that are not true and did not happen in reality, and believe them all.
Thanks for reading.
Comments, as always, welcome.
Love,
Reena
[wp_ad_camp_4]

Taking “Satvic” (Vegetarian) food as a lifestyle, surrendering to What is; then, if it be a seeker’s due, mystical experiences may come “willingly”, in wakeful hours, as a Gift from THAT Which Is.
Dreams, seemingly real, are mystical catalysts; but must be taken with a pinch of “maya” (Illusion). However, dream on.
For, in fact, we’re just that. A dream.

Well said, Reena! It made total sense to me, and I suppose I could always throw in that old cliche, “been there…done that”!
Over the past few months, there have been times when I’ve woken up, and even tho I was still in my body – I was not sure who I was!!! One night, in particular, I was walking around my apartment (I purposefully left the lights off) trying to remember who I was, and frantically trying to hold onto the personal memories of myself. I was not frightened, as I realized that at that point I could choose to be whoever, or whatever, I wanted to be or do. I finally just sat in a cross-legged meditation position, and tuned into my heart. During all of these happenings, the one thing that calmed and centered my awareness was to focus on the loving energy that comes from within my heart. I know I was up for at least an hour, but eventually I fell asleep again.
I find it so interesting and amazing in talking, listening, and reading of other people’s spiritual growth, as each of us is following a path that works for us, but may not work for someone else.
Thanks so much for sharing, Reena!

Dreams are fascinating. Sometimes it is a real shame that details evaporate so soon after waking.
I can understand where you are coming from realising that you are not always in your own dreams. I have many dreams that are more akin to watching TV. I can’t actually state with any certainty that I am not aware of my own presence, but many times I know I am no more than a passive observer. In other dreams I am very central to “the plot”. The dream I related to you recently about how my cat appeared in my dream to tell me she had died was obviously one of them.
One curious, if not slightly prurient, observation is that as I grow older, with the spirit still being willing, but the flesh becoming ever weaker, is the amount of sexual dreams I have. Even weirder is just how successful those dreams are. Many, many moons ago, when the hormones were raging like fire, I never had dreams like that. (And it wasn’t because those fires were being dowsed in the waking world !).
Your preoccupation with ME (that’s the Reena Me, and not the me Me) is intriguing. One of the great things about your blog is that it makes you stop and think. How do I think about ME (the me ME). Well one of the obvious things about ME is that I have a name, or a label. That’s handy to make sure I get my post and not someone else’s.
A half baked idea that comes to mind is the ME is (like) the title of a book. Strangers can see the cover. Those known can read the contents, some can read the abridged version, but only those who are close and/or trusted can read the full pages inside. The best bit is that it is still being written.

Bill, this comment slipped into the Spam comments – good job I checked just now. Wonder how many others have slipped through the net and disappeared into the wordpress spam black hole.
It’s not so much preoccupation with the ‘me’ but that thoughts arise about the ‘me’ which is possible in an objective way if the ‘me’ gets out of the damned way 🙂