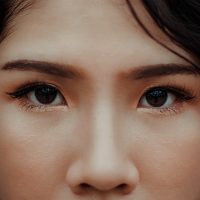 If you don’t want to read the whole article then the synopsis is in the last paragraph.
Funny, but I’ve been thinking about the eyes and how they are indeed (the article below mentions this) the window of the soul. You can tell an awful lot about someone from looking into their eyes. It’s like the eyes are a massive concentration of energy, information. Plus they are either side of the third eye, which truly is an energetic doorway. And some people have great transmission of Light emanating from the eyes, such as Mother Meera, whom I went to see a few years ago. She simply look into your eyes to give her ‘blessing.’
So, keep your eyes peeled on this article….(lil joke).
Enjoy 🙂
[Please click link at bottom to see images and links within the article – thanks]
~~ Start ~~
Confirmed: The Eye Emits Actual Light (Biophotons)

Look deeply into the human eye, and you are bound to get lost in its abysmal beauty. Much like mirrors facing one another in the dizzying cascade of visual infinitude, the seer gets lost in the spectacle, of which s(he) forms a part, i.e, you are an eye seeing at the same moment that you are seeing an eye; percipient and perceptible; seeing and visible.
That exquisite aperture – the mammalian eye – through which the light of the Universe passes into the darkest recesses of the human brain, is actually an extension of the nervous system – that like a plant – grows towards the light which nourishes it. Nourishes it how? With both energy and information, which is the very dual nature of Light.
The eyes do not age like the rest of our organs, due to the exaggerated expression of the chromosome-healing enzyme telomerase. As cells divide, important code at the end of the chromosomes can be damaged when the telomeres are sliced apart during mitosis (cell division). Like the ends of shoe strings, these telomeres are tended to and healed by the enzyme telomerase. The better shape the telomeres and the enzyme telomerase are in, the healthier will be the daughter cells following cell division, and the more long-lived and youthful these organs will be. Since the eyes have a unique level of chromosome-healing activity at their disposal, this explains so well how an aged individual’s eyes can relume brilliantly the youthful qualities of their soul.
Look closely at your own eyes in a reflective surface, and tell me whether or not you see that they are not simply receptacles of light and perception, but that they project their own light (i.e. their soul)?
Indeed, new research published in the Journal of Brain Research in Jan. 19 2011 show that the mammalian eye exhibits a “spontaneous and visible light-induced ultraweak photon emission.” More details:
Here, we present the first experimental in vitro evidence of the existence of spontaneous and visible light-induced ultraweak photon emission from freshly isolated whole eye, lens, vitreous humor, and retina samples from rats. These results suggest that the photochemical source of retinal discrete noise, as well as retinal phosphenes, may originate from natural bioluminescent photons within the eyes. During normal vision, the eyes are continuously exposed to ambient powerful photons that pass through various parts of the eyes, which can produce ultraweak delayed bioluminescent photons that arise from diverse parts of the eyes. Although the importance and possible role of ambient light-induced permanent delayed photons (within different parts of the eyes) during vision requires further investigation, our study may provide evidence of an origin of discrete dark noise and retinal phosphenes. View Source
In another study published in May 2011 in the Journal of Photochemistry and Photobiology, on the bioluminescence of the mammalian eye, an explanation of “negative afterimages” is provided. A common example of a negative aftermage is the bright glow that seems to float before one’s eyes after looking into a light source for a few seconds. More details here:
The delayed luminescence of biological tissues is an ultraweak reemission of absorbed photons after exposure to external monochromatic or white light illumination. Recently, Wang, Bókkon, Dai and Antal (2011) [10] presented the first experimental proof of the existence of spontaneous ultraweak biophoton emission and visible light induced delayed ultraweak photon emission from in vitro freshly isolated rat’s whole eye, lens, vitreous humor and retina. Here, we suggest that the photobiophysical source of negative afterimage can also occur within the eye by delayed bioluminescent photons. In other words, when we stare at a colored (or white) image for few seconds, external photons can induce excited electronic states within different parts of the eye that is followed by adelayed reemission of absorbed photons for several seconds. Finally, these reemitted photons can be absorbed by non-bleached photoreceptors that produce a negative afterimage. Although this suggests the photobiophysical source of negative afterimages is related retinal mechanisms, cortical neurons have also essential contribution in the interpretation and modulation of negative afterimages.
The light that emanates through the “window of the soul,” the human eye, is not “imagined,” but real and these biophotons contain energy and information (wave-particle complementarity of Light), capable of transforming our understanding of one another, and ourselves.
From: http://consciouslifenews.com/confirmed-eye-emits-actual-light-biophotons/1123839/
~~ End ~~

Yea but what about Helen Keller. This article, perhaps i should reread, is stating without sight one cannot experience an Epiphany of sorts. Also included would be individuals with traumatic brain injury including that of spinal brain injury. All of which effect the eyes. And there are a lot of people with these type of injuries.

Boy has cat-like eyes that can see in the dark.
http://www.wimp.com/cateyes/

tom, amazing eyes this boy has!