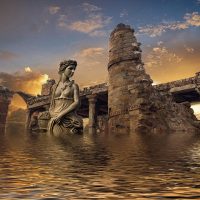 Very long video – 3.20 hours!
Thought-provoking and covering many topics incl. Atlantis history, Agartha, Ascension, creation, duality, plaedians, extraterrestrial civilisations, consciousness, spiritual dimensions and more. Some interesting talks (eg Omnec Onec) and channellings included. (I have a fair way to go before I get to the end of the video however…).
One term I just heard as I write whilst listening to the video, is ‘global enlightenment’ – love it. That’s what’s required yes!
Enjoy.
(PS. At 1.07.25 the eye symbol is a little too much like the illuminati’s!)
(PPS More on Omnec Onec here: http://www.squidoo.com/omnec-onec-the-woman-from-venus. And another video below the first about this Venusian whose is an incredible story.)
===
The Legend of Atlantis – Its Time to Wake Up

[youtube]GRQgVREbL_4[/youtube] Youtube intro:
“Thousands of years ago the gods came down to Earth from the stars to initiate a genesis. Human civilization was formed and reached a peak with Atlantis. A dark age began and the battle of Atlantean gods led to its fall. A secret brotherhood brought Atlantean secret teachings before the fall to Egypt. Through all civilizations and with inspiration from extraterrestrian guards the secret Atlantean brotherhood managed all political systems with an educational mission. The thrilling documentation shows for the first time the secret activities of a brotherhood in relations with invisible masters from Shambhala and Agharta and the secret about the hollow earth
Following the catastrophe in Atlantis all nations were dispersed. A part of the Atlantean brotherhood’s secret knowledge survived in Egypt, in India and in Tibet. The heirs of these secret brotherhoods led mankind during the dark age…through Atlantean knowledge and through all ages. In modern times the Freemasons, Templars and Illuminati brotherhoods were formed. After World War I the Neutemplerorden and Thule society emerged in Munich and Vienna. New occult sects which saw ‘satan’ in the old Freemason lodges. With Hitler these occult sects came to power. This thrilling documentation shows for the first time the background of the Third Reich and its intellect which led to the catastrophy of World War II
Atlantean secret knowlege tells us the legend of mankind and those souls, who have to undergo cycles. With the fall of Atlantis a gigh civilization cycle had ended. All prophecies and more recent Earth changes point out that today’s mankind has reached the end of the next experience cycle. Up to the year 2011 the most serious Earth and climate changes, earthquakes, social and political changes have been predicted. This thrilling documentation shows the prophecies of ELIA, the returned prophet and his message on the last days, Christ’s return and the space Brotherhood
Milleniums have passed… since the high culture of Atlantis sank with a catastrophe through power abuse of some corrupt scientists. All humans of that time, who also experienced the descent into the dark age, are being reincarnated today. The thrilling documentation shows the return of the Atlantean light children and allows deep insight into the role of the lightworkers and brotherhoods of Atlantis. It shows why some souls reincarnate today and act as environmental protectionists, therapists, artists, esoterics etc. for the healing of the earth. Addresses also the Space Brotherhood events–11:11, the hollow earth, Shambhala and Agharta.”
PR Trailer Omnec Onec
[youtube]z6gEzdNsjV0[/youtube]

Will take under advisement

“Lately our Oz Governmental Radio National Broadcasting Network, the ABC, has begun 5 am broadcasts of interviews with New Age know-alls around the globe ­ mainly American, mind you ­ reinforcing the fact that this is a wonderful, nurturing world, and that the combined efforts of these do-gooders are making a tremendous difference to our lives, for the better.
The conclusion at the end of each session is that we can look forward to a wondrous future of health, wealth, happiness, love, felicity, tranquillity and harmony.
I know. I know, it sounds like these people have been taking the likes of LSD and other magic potions!
Well, these broadcasts are a sort of verbal LSD being distributed to the masses in the hope they will be lulled back into a demented twilight from which they will not see the real state of the world or question what is going on. ”
http://www.rense.com/general95/real.htm

http://johnkettler.com/blog/ See what you think

I think LSD is too cheap and available nowadays.
If you try to actually check any of the nonsense that guy writes, you’ll see that some 95% of his claims are plain wrong or outright lies. A nice example of total bunch of crap is here: http://johnkettler.com/anti-ufo-weapon-destroyed.html/
Let alone that there is NO single bit of real fact behind any of those claims, he obviously thinks that his readers can’t even do basic maths or noone bothers reading any reports with real numbers. Example from the linked “article”:
“The anti-UFO fire control center called Kolskaya was being towed to a new position when hit by the “wave out of nowhere,” the move apparently tied to changes in the Earth’s shape from prolate spheroid to more of a spheroid. This was because the thinning polar caps have significantly reduced the Equatorial bulge”
First, the polar caps are not thinning but have been thickening again since 2007 at least.
Second, even if that was happening, it would make the Earth LESS spheroid by INCREASING the equatorial bulge.
Third, the guy sells the global warming hoax.
And that’s just one minor example of many. The guy is a fraud, either some COINTELPRO product or just plain nuts.