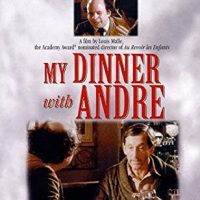 Thought some of the readers here might like to watch it. It’s about 110 minutes long. I enjoyed it a lot – the ideas portrayed were not unfamiliar and great to see them encapsulated in a movie in this way.

Here’s Wikipedia’s synopsis and here is a review by the New York Times.

An extended conversation between two old friends over dinner proves an unexpectedly fascinating subject for a film in the critically acclaimed My Dinner with André. The talkers in question are André Gregory, a renowned experimental theater director, and playwright and actor Wallace Shawn, both of whom play themselves. The film is not a documentary, but a condensation of several real discussions fashioned into a dramatic exchange by Shawn and director Louis Malle. The subtle conflict stems from the differences in the men’s characters: Gregory is an inquisitive, uninhibited wanderer, willing to travel to remote lands to take part in unusual foreign rituals, while Shawn is the cynical, realistic New Yorker, more concerned with the challenges and rewards of day-to-day city life. Malle approaches their philosophical yet playful back-and-forth with a straightforward, minimal style that only rarely wanders outside its restaurant setting. The focus therefore falls on Shawn’s and Gregory’s contrasting verbal styles and facial expressions, highlighting conversational nuances normally lost on film. While the idea of watching any conversation for over 90 minutes, no matter how fascinating, may turn off some viewers, enough audiences have supported the film to make it an art-house classic. ~ Judd Blaise, Rovi

My Dinner with André