Save the Rhino – Avaaz Petition 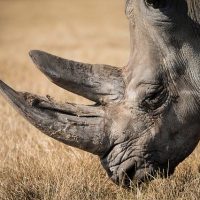 If you are already signed up with Avaaz, all you have to do to sign the petition is enter your email and hit Send. If you’re not signed up yet, it’s just 4 fields to complete. Let’s stick up for our beautiful animals.
~~ Start ~~
Dear friends,

The rhino is being hunted into extinction and could disappear forever unless we act now. Shocking new statistics show 440 rhinos were brutally killed last year in South Africa alone — a massive increase on five years ago when just 13 had their horns hacked off. European nations could lead the world to a new plan to save these amazing creatures but they need to hear from us first!
Fueling this devastation is a huge spike in demand for rhino horns, used for bogus cancer cures, hangover remedies and good luck charms in China and Vietnam. Protests from South Africa have so far been ignored by the authorities, but Europe has the power to change this by calling for a ban on all rhino trade — from anywhere, to anywhere — when countries meet at the next crucial international wildlife trade summit in July.
The situation is so dire that the threat has even spread into British zoos who are on red-alert forrhino killing gangs! Let’s raise a giant outcry and urge Europe to push for new protections to save rhinos from extinction. When we reach 100,000 signers, our call will be delivered in Brussels, the decision-making heart of Europe, with a crash of cardboard rhinos. Every 50,000 signatures will add a rhino to the crash — bringing the size of our movement right to the door of EU delegates as they decide their position. Sign the petition below then forward this email widely:
http://www.avaaz.org/en/save_rhinos/?vl
So far this year one rhino has been killed every day in South Africa, home to at least 80% of the world’s remaining wild rhinos. Horns now have a street value of over $65,000 a kilo — more expensive than gold or platinum. The South African Environment Minister has pledged to take action by putting 150 extra wardens and even an electric fence along the Mozambique border to try and stem the attacks — but the scale of the threat is so severe that global action is required.
Unless we act today we may lose this magnificent and ancient animal species permanently. Some Chinese are loudly lobbying for the trade in horn to be relaxed, but banning the trade in all rhinos will silence them. With the EU’s leadership, we can bring these international gangsters to justice, put the poachers in prison, and push for public awareness programmes in key Asian countries — and end this horn horror show for good.
In the next few weeks, the EU will be setting its agenda for the next big global meeting in just a few months — our best chance of turning the tide against the slaughter. We know that rhinos will be on their agenda, but only our pressure can ensure they challenge the problem at its source. Let’s build a giant outcry and deliver it in a spectacular fashion — sign now and together we can stop the slaughter across Africa:
http://www.avaaz.org/en/save_rhinos/?vl
In 2010, Avaaz’s actions helped to stop the elephant ivory trade from exploding. In 2012, we can do the same for the rhino. When we speak out together, we can change the world — last year was the worst year ever for the rhino, but this can be the year when we win.
With hope,
Iain, Sam, Maria Paz, Emma, Ricken and the whole Avaaz team
More Information:
Few Rhinos Survive Outside Protected Areas (WWF)
ttp://www.worldwildlife.org/species/finder/rhinoceros/rhinos.html
South Africa record for rhino poaching deaths (BBC)
http://www.bbc.co.uk/news/world-africa-15571678
‘Cure for cancer’ rumour killed off Vietnam’s rhinos (The Guardian)
http://www.guardian.co.uk/environment/2011/nov/25/cure-cancer-rhino-horn-vietnam
British Zoos on Alert as Rhino Poaching Hits the UK (International Business Times)
http://www.ibtimes.co.uk/articles/289792/20120130/british-zoos-uk-alert-rhino-poaching-hits.htm
~~ End ~~