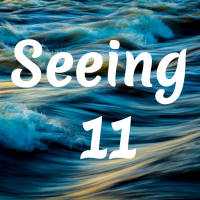 Ok, so I have been resisting posting about seeing 11’s (1’s?) everywhere. Probably because it seems like such a crackpot thing to post. But then again, I’m all about being a crackpot so here goes.

My younger son told me I’m just looking for the number 11 everywhere – ie self-suggestion. But I’m not an idiot (despite what some would say 🙂 – it seems to happen much more frequently than is likely to be mathematically probable. It even drives me crazy at times as it stops me in my tracks and keeps on happening – currently on a daily basis – for many months.

When I see the number 11 several times a day I am not looking for it. It’s only after I see 11 that I notice it’s 11. And the 11’s just keep on coming, as if demanding attention. I posted about seeing 11’s before  – yep, it’s been happening for some time – click here for that post.

Well, it’s still happening to me and it seems to be when I am much more spiritually attuned than when I’m more unconscious.

So I decided to Google it. And surprisingly and thankfully, it’s official – others are also likewise afflicted!

Here are other articles about this seemingly magical number:

The ways in which I see 11 are mainly:

The previous house we lived in for many years up until two years ago, was the number 115 and the telephone number there had in it 1125. My current mobile number that I have had for some years has 110 in it.

It’s got to the point that I see the number 11 several times a  day, sometimes every hour, but at least about 4-7 times a day, or even more. Ok, so what’s it all about? Here’s a few possibilities and some I’ve gathered from reading around the net:

Ok, so on a serious note, I personally don’t think it’s a coincidence. I’m too logical to believe this can happen to so many people (just Google it) and defy the law of averages so consistently and with just this one number.

I think something spiritual is definitely afoot. What though, I am not so clear.  Angels knocking – possibly. Just the knock from the universe bringing you back into present awareness – likely. Your being guided to take a look at reality and life in different way? Yes, probably. Your being asked to take the red pill? Yes, again, likely. But on the latter note, I happen to think that much of what happens in life is urging us to take the red pill, but most people are too set on maintaining their blue pill outlook. So maybe the seeing of 11’s is that wake-up call.

I see this all the time. I know a lot of meanings behind numbers, and I’m always looking up angel numbers if it’s repetitive. However, I always see 11 after and it’s been happening more and more. Before it used to just be 11:11 but for the past week, it’s been a lot. Today, I woke up at 6:11 in the morning, and I walked to the coffee shop after getting ready for the day, and I got there at 7:11. I didn’t look at my phone again until I got there. I stayed there a bit and got home at 8:11. Usually, seeing repetitive numbers means the Angel’s are trying to tell you something, and I know 11 is a powerful number and it’s also a master number. It also usually means new beginnings and to think positively. So I’m wondering if they’re trying to keep me from falling into a negative mindset again. For almost 2 years up until last January, I went through some stuff and for 2 years, I was thinking nothing but negative things. I decided in January to make a change, and I’ve been a lot happier with myself and I’m even thinking of asking out a guy I really like next week. I’m wondering because sometimes since I doubt he will say yes (hes very attractive and I’ve never thought I was too pretty) that is why I keep seeing 11 after. Maybe it’s a nudge to keep thinking positively.

So what???? It has been happening to me for years and nothing extraordinary never happened….on the contrary…. The past 12 years have been only shit over and over again….so thank you god but go fxxx yourself creator of my ass.

It is not a question of anything extraordinary happening or expecting this, but – as I now see it – it’s about being given a spiritual nudge by the universe / astral plane / our soul. A nudge that the truth of life lies somewhere other than via our 5 senses – or our pleasure and pain, or our anger, or our past. We are addicted to all of these. I see it as doorway opening into an immense vista beyond our sense of who we are. We just have to open our inner eyes for this vista. Then bliss can come forward.
Just some thoughts. Thanks for your comment.
Btw, I am seeing 11:11 and 11 every day multiple times for the last few months. The phenomenon continues…:)
Light

I wonder if instead of it being angels talking to you/us, if you/we are the angels. I get off of the bus. I stand or sit and read a book or play on my phone. My movement seems to awaken people. Homeless people who generally float around like dandelion fluffs will stop and pay attention to me. I will be thinking of a song or something in my head. I am certain I am not talking out loud and people will look at me as if I said something. I will look at someone minding their own business and the more melanin they have in their skin, the quicker they will look at me as if I called them. I don’t think seeing 11 after whatever hour is a coincidence any longer but I wish I really knew what it meant. I am hoping it is extremely good.

I’m sow happy I read these and I’m not the only one my live change comepletly I new I’m not alone ……. Think ..u…god.. Wow. These is. God awaking people. Stay whith god I was Bourne my on 10/11/88 – 11 I was thinking and just like u said it happen two me let me now more.. People now but we don’t who are we people day don’t what two tell us. Think u sow much god be whith u.and me.

I got intrested in this 11 phenomena, when i came across this 11 magazine, http://1111mag.simran-singh.com. I don’t see 11s appearing everywhere but i am intrested in what people say about it.

I see 11 everywhere. It has been going on so long that i also now notice numbers automatically that add up to 11. And for some strange reason my telephone lights up EVERY night at 10:46. I just smile.

Maximum visitors to this blog today was at 12.11 (I have a module on this site that gives these stats). Maximum visitors this month was also at 12.11 on the day in question. I saw the time at 11 minutes past the hour at least once today – maybe more, but I no longer remember each time now, it happens so frequently.
barbie, your telephone lighting up is a funny one! You’ve got me adding up numbers now too 🙂 Well, it beats worrying about the price of vegetables.