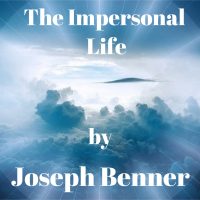 I wish I had come across this book years ago.  I don’t know why I didn’t, but better late than never 🙂  I’m currently nearing the end of listening to an audio version of it and I wanted to post this up sooner rather than later because of the power of the words contained within it.

The book is also know as the ‘I AM Teaching’.

It’s hard to fully encapsulate what this book is.  It can lead you into a breakthrough with understanding your own Divine Self, it has done that for me.  Apparently Elvis carried a copy of this book with him and it was found on him when he ‘died’.  (It may sound cryptic, but why I’m putting the apostrophes there is a story for another time 🙂

In a nutshell, the Impersonal Life is written as the word of God.  It was originally written anonymously by Joseph Benner and after his passing, his wife issued it under his name.  Can you imagine that this book was not written recently during this time when non-duality and oneness teachings are making headway on the stage of spirituality, but over a century ago in 1914.

This book must be read from beyond the dismissive intellect…if you read it whilst evaluating in your mind what you hear (agree / disagree, wrong/right etc) then you will miss the point.  Having said that, and it does sound a bit harsh, we do all need to go through the hold of the intellect on us, until finally we can see that it keeps us in bondage.

Wikipedia says about Joseph Benner and The Impersonal Life:

“According to author Jon Klimo, “by 1916, Benner said he felt he could no longer resist the growing inclination to give himself over as a vehicle to a larger presence, to let his mind be subsumed by (or co-creatively interact with) a larger Mind or Being.”  His book The Impersonal Life contained words Benner believed were recorded directly from God, and was first published in July 1914.  Benner taught that Christ’s proclaiming “I AM” indicated “the true spirit that resides in every human being.”

“His book, The Impersonal Life, is difficult for many persons who are new to the theory.  In the first chapter, Benner repeatedly uses the phrase, “I AM,” to express the concept that God is inside of each one of us, doing the thinking and creating.  This is an ancient belief, reflected in the Bhagavad Gita.  However, it is new to many Christian readers, and can be a difficult concept for many in the West to initially accept.”

I think Joseph Benner was very ahead of his time, given that he lived in the West in a Christian belief system which did not see God in this way.  What the words in his book are indicating is the God that we are intrinsically already, not a separate being somewhere out there, and also the God that we shun in favour of our own god – our mind, body, intellect.

Until we don’t and we finally and deeply understand the divine oneness in and of everything.  Which is that it is literally God Himself seeing through our very own eyes.

(Btw, my use of the word God and He or Him is mostly for the sake of making language flow, as language is very limited and gets imbued with ego or the flow is impeded if you have to clarify words mid-sentence.  Sometimes I can use terms like Divine Source of She or It.  The words are not so important, it’s the meaning that is.)

Here is the first chapter below.

To you who read, I speak.

To you, who, through long years and much running to and fro,
have been eagerly seeking, in books and teachings, in
philosophy and religion, for you know not what — Truth,

To you whose Soul is weary and discouraged and almost
destitute of hope;

To you, who many times have obtained a glimpse of that
“Truth,” only to find, when you followed and tried to reach it,
that it disappeared in the beyond, and was but the mirage of
the desert;

To you, who thought you had found it in some great teacher,
who was perhaps the acknowledged head of some Society,
Fraternity or Religion, and who appeared to you to be a
“Master,” so marvelous was the wisdom he taught and the
works he performed; — only to awaken later to the realization
that that “Master” was but a human personality, with faults
and weaknesses, and secret sins, the same as you, even though
that personality may have been a channel through which were
voiced many beautiful teachings, which seemed to you the
highest “Truth;”

And here you are, Soul aweary and enhungered, and not
knowing where to turn —

Likewise to you, who have begun to feel the presence of that
“Truth” within your Soul, and seek the confirmation of that
which of late has been vaguely struggling for living expression
within;

Yes, to all you who hunger for the true “Bread of Life,” I AM
come.

Are you ready to partake?

If so, then arouse yourself. Sit up. Still your human mind and
follow closely My Word herein spoken. Or you will turn away
disappointed once more, with the aching hunger still in your
heart.

I, Who speak with such seeming knowledge and authority?

I AM You, that part of you who IS and KNOWS;

WHO KNOWS ALL THINGS,

And always knew, and always was.

That transcendent, innermost part of you which quickens
within as you read, which responds to this My Word, which
perceives Its Truth, which recognizes all Truth and discards all
error wherever found. Not that part which has been feeding on
error all these years.

For I AM your real Teacher, the only real one you will ever
know, and the only MASTER;

I, your Divine SELF.

I, the I AM of you, bring to you this My Message, My living
Word, as I have brought to you everything in life, be it book or
“Master,” to teach you that I, and I alone, your own True Self,
AM The Teacher for you, the only Teacher and the only God,
Who is and always has been providing you not only with the
Bread and Wine of Life, but with all things needed for your
physical, mental and spiritual growth and sustenance.

Likewise, all that ever appealed to You, coming from some
outward expression, was but the confirmation of My Word
already spoken within. The outward expression was the avenue
or means I chose at the time through which to reach and
impress your human or self consciousness.

I AM not your human mind, nor its child, the intellect. They
are but the expression of your Being, as you are the expression
of My Being; they are but phases of your human personality,
as You are a phase of My Divine Impersonality.

Weigh and study carefully these words.

Rise up and free yourself now and for always from the
domination of your personality, with its self-inflated and self-
glorifying mind and intellect.

For your mind henceforth must be Your servant, and the
intellect Your slave, if My Word is to penetrate to your Soul
consciousness.

I AM come now to your Soul consciousness, which I have
quickened expressly in preparation for the reception of My
Word.

Now, if you are strong enough to bear it;

If you can put aside all your private personal fancies, beliefs and
opinions, which are but the rubbish you have gathered from
the dumping grounds of others;

If you are strong enough to cast them all away; —

Then My Word will be to you a source of endless Joy and
Blessing.

Be prepared to have this personality of yours doubt My Word
as you read It all along the way;

For its very life is threatened, and it knows it cannot live and
thrive and longer dominate your thinking, your feelings, your
going and coming, as of old, — if you take My Word into
your heart and permit It there to abide.

To make you conscious of My Presence;

For I have likewise prepared your human mind so that it can,
in a measure, comprehend the meaning of Me.

I have been with you always, but you did not know it.

I have purposely led you through the Wilderness of books and
teachings, of religions and philosophies, keeping ever before
your Soul’s eye the vision of the Promised Land; feeding you
with the manna of the Desert, that you might remember and
value and long for the Bread of the Spirit.

Now I have brought you to the river Jordan that separates you
from your Divine heritage.

Do you want to go?

Then follow this My Word, which is the Ark of My Covenant,
and you shall go over dry shod.

You can read the whole book for free via a PDF from the page on the Free Spiritual eBooks page – scroll down to ‘Other Authors and Works’ section.  If you prefer to listen, Audible and Audiobooks both offer a free trial where you can listen for free, if you haven’t already taken advantage of this.

I just wanted to let you know of this amazing gem – there are few books like this.

Elvis – How Great Thou Art

And finally, as a moment of worship to the Great I Am, our Real Teacher, plus having mentioned Elvis above, I couldn’t help but slip in Elvis’s rendition of How Great Thou Art.  I love both this gospel song (not that I’m a Christian but rather a lover of the one omniscient beyond-religion God everywhere) and for some reason Elvis touches my heart the moment he starts singing, as he did so touch many people’s hearts, and continues to do so.  For both these reasons tears come to the eyes and this song stops me in my tracks no matter what I’m doing.  I hope you en-joy it too.

Her mission is to share insights, knowledge and resources to help bring about direct experience of the Absolute.