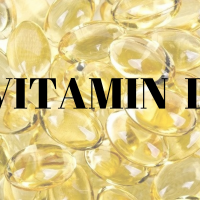 Well I’m not sure this article actually says Vitamin DOES outperform pharma drugs at treating cancer, but in any case research certainly points in this direction. Suffice to say that Vitamin D may well be one to add to supplements you take if you don’t already (though I’m not medically qualified…) Personally, I take it every few days rather than daily as one is never certain if one is taking too much, but for sure Vitamin D is one of those supplements I will be topping up when I run out.

Of course better than supplements is natural Vitamin D through food (though it is not so easy to get Vitamin D through foods naturally especially if you don’t eat meat or fish – see here) and the sun. Though in terms of the latter I doubt we’ll get much of that this weekend here in the UK, it’s more like monsoons. Have a good weekend 🙂

Everyone is deathly afraid of coming down with cancer, yet the very lifestyle that promotes cancer is the most popular. Cancer has been one of the leading causes of death in the United States, UK, and many other nations for years. Something is terribly wrong, as the war on cancer is failing miserably. The use of pharmaceutical drugs is not the answer, and the idea of prevention is seldom voiced. Luckily, making some dietary changes can reduce your cancer risk significantly. One example is showcased with research showing that a relationship between vitamin D and cancer exists; raising vitamin D levels can be more effective and much safer than dangerous pharmaceutical drugs and treatments. It costs a whole lot less as well.

Angus Dalgleish, a consultant medical oncologist residing in a city known as Tooting in south-west London, tests all of his patients for vitamin D levels and prescribes supplements for when the levels are low. Dalgleish noticed that patients at his clinic at St Georges suffering from melanoma, the deadliest form of skin cancer, almost all were vitamin D deficient. Not only does the medical oncologist prescribe vitamin D for his melanoma patients, but he also prescribes the vitamin for other patients who are stricken with other types of cancer.

“If we supplement people who are low they may do better than expected. I wouldn’t be a bit surprised if vitamin D turns out to be more useful in improving outcomes in cases of early relapse than drugs costing £10,000 a year,” said Professor Dalgleish. “I spent a decade studying interferon for which the NHS paid £10,000 annually per patient for years for very little benefit. Vitamin D is much more likely to give a benefit in my view.”

Other research from the University of Leeds showed similar connections between vitamin D and cancer, specifically melanoma. Patients with the lowest vitamin D levels had the gloomiest outlook and were also 30 percent more likely to suffer from the disease in the future than those with higher vitamin D levels.

At Creighton University in Nebraska, Joan Lappe, a professor of medicine, also noticed a strong link between vitamin D and cancer. He took note of the vitamin d and cancer relationship when cancer patients who received vitamin d and calcium supplementation increased their survival rates significantly. Although the trial was originally meant to evaluate the effects of supplements on osteoporosis, this accidental finding led Lappe to examine the effects of supplements on cancer.

Apart from traffic accidents, plane crashes, murder etc. it seems that in the developed world people only die from cancer or heart attack. It makes you wonder what exactly is a natural death.
This business with vitamin D sounds, on the face of it, a bit of a paradox. The body can easily make enough vitamin D when exposed to sunlight, and yet melanomas are usually said to come from over exposure to sunlight. I would guess that those who suffer from melanomas are those who spend most of their time indoors, in the car, etc. cut off from the sun most of the time, and then go and burn up in fierce sunshine while on holiday. Daily short exposures to the sun, such as walking a mile or two a day, probably builds up resistance to fierce sunshine.
Of course, here in the UK, and particularly in London, we are not seeing much sunshine currently. Today was the 1000 boat flotilla on the River Thames as part of the Queens jubilee celebrations – and it poured with rain ! Has the Queen fallen out with the illuminati and their weather altering machine ? I think the conspiracy theorists owe us an explanation !